- April 16, 2016
From the UN Pacific Regional Anti-Corruption (UN-PRAC) Project, a joint four-year initiative of the United Nations Development Programme and the United Nations Office on Drugs and Crime, with support from the Australian Government. Updates shared by Annika Wythes, Luisa Senibulu, Samita Singh, and Mihaela Stojkoska. 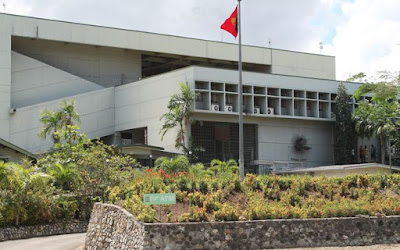 Attorney General and Justice Minister charged for abuse of office.  Papua New Guinea's Attorney-General Ano Pala has been arrested and charged with abuse of office and misappropriating more than K3 million (US$1 million) in public funds.
http://www.pina.com.fj/?p=pacnews&m=read&o=253156008570d75210a0ccf8e937c1

Election petition against Samoa's speaker dropped.  The speaker of Samoa's parliament, Le'aupepe Tole'afoa Fa'afisi, says an election petition filed against him over allegations of bribery and treating will be withdrawn.
http://www.radionz.co.nz/international/pacific-news/301279/election-petition-against-samoa's-speaker-dropped

- February 11, 2015
Richard Bistrong , a writer, speaker , and blogger on anti-bribery compliance issues, contributes the following guest post: As the recent OECD Foreign Bribery Report made clear, debarment (prohibiting the defendant company or individual to engage in future government contracting) is very rarely used as a sanction in foreign bribery cases, most likely because prosecutors worry that debarment would be an excessive penalty that would often do too much collateral damage to innocent parties. I have argued that debarment can and should be used more frequently, and that the legitimate concerns about disproportionate punishment can be addressed by using various forms of “partial debarment.” In a recent post , Professor Stephenson draws attention to a number of potential shortcomings to my proposal. While I agree with some of his points, I think he understates the ways in which debarment—as distinct from fines or other monetary penalties—can have a distinctive deterrent effect on f
Read more

- February 08, 2015
Addis Ababa — The role of Civil Registration and Vital Statistics (CRVS) in attaining good governance in Africa as well as the need for good governance itself in conducting the civil registration processes across the continent, will come under review at a regional conference slated for the 7th to the 9th of February 2015 in Yamoussoukro, Côte d'Ivoire. Read more in All Africa. http://allafrica.com/stories/201502061554.html
Read more

- December 10, 2019
International Anti-Corruption Day - United against corruption for development, peace and security (Campaign resource).  The global campaign #UnitedAgainstCorruption focuses on corruption as one of the biggest obstacles to achieving the Sustainable Development Goals (SDGs). Find out about the campaigns and its communications materials via the link below. United Nations : http://www.anticorruptionday.org/actagainstcorruption/en/index.html   Ensuring sustainable solutions to combatting corruption (Blog).   “Learning from our anti-corruption work in the past decade, we, together with our development partners and the anti-corruption development community in general, have identified four key priority areas of interventions for the ‘Next Generation of Anti-Corruption Programming’: Sustainable Development Goal 16 (#SDG16) and anti-corruption; technology and innovation; business integrity; and social accountability.” Haoliang Xu/United Nations Development Programme:  https://
Read more