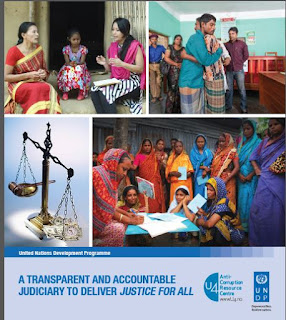 Opening court services to peer scrutiny might greatly improve integrity and public trust, new report says
08 APRIL 2016, Bangkok: Corrupt judicial systems undermine reforms and are a major impediment to ensuring access to justice and human rights for ordinary citizens across the world, says a new report published by the United Nations Development Programme and U4 Anti-corruption Resource Centre on Friday.
Titled, A Transparent and Accountable Judiciary to Deliver Justice for All, the global report cites survey data suggesting that the public perceive the judiciary as the second most corrupt public institution, after the police.
Globally one in four people said they paid a bribe to court officials, according to a 2013 survey by the NGO Transparency International that covered 95 countries.1By 2015, TI found that 28% of citizens across Sub-Saharan Africa who had contact with a judge or court official paid a bribe – more than police and any other public sector service.2
“Judicial corruption disproportionately affects the poorest and most marginalised citizens of a community because they are far less likely to be able to pay a bribe or have access to influential networks,” said Patrick Keuleers, Director, Governance and Peacebuilding at UNDP headquarters.
In Bangladesh, for example, the average bribe of US$108 that a court user has to pay accounts for roughly a quarter of the GDP per capita or average annual income in that country, says the report.
“The UN system and its partners support numerous initiatives to strengthen judicial systems around the world, and corruption remains a major stumbling block to the success of these efforts,” Keuleers said.
The UNDP report concludes, however, that opening up judicial systems to scrutiny can strengthen integrity and increase public trust without impeding independence of the judiciary.
“We are advocating the judiciary to open itself to peer learning by engaging with counterparts in other countries and allowing meaningful capacity assessments that will lead to increased judicial integrity” said Phil Matsheza, Regional Practice Leader in UNDP’s Bangkok Regional Hub.
The report highlights successful experiences from Afghanistan, Bosnia and Herzegovina, Colombia, Indonesia, Kenya, Kosovo3, Nepal, Nigeria, Paraguay, Philippines, and Somalia, in promoting transparency and accountability within the judiciary.
It discusses internal oversight within the judiciary such as judicial councils, and explains the mechanisms used in Somaliland to enforce sanctions against judicial officers in cases of misconduct.
It also looks at how stakeholders such as associations of judges and court users can become allies in reforming judicial systems. For example, the report cites the use of surveys and consultations with court users that have led to more responsive services and reduced demands for bribes in countries such as Kenya and Nigeria.
"Corruption undermines justice in many parts of the world with the poor and vulnerable suffering most,” said Cobus de Swardt, Managing Director of the International Secretariat of Transparency International.  “This new report gives critical first-hand answers about promoting integrity in the courts by building citizen and other stakeholders’ support for reforms and by using technology to increase judicial transparency.”
Even in post-conflict environments such as Afghanistan, where change is difficult, NGOs working with citizens to monitor trials in selected provinces have contributed to improving the administration of justice.
While technology is not offered as a panacea to corruption within justice systems, modernisation and automation of judicial services can be key enablers for judicial transparency and accountability, the report adds.   For example, in Indonesia digitising court documents and statistics has helped increase transparency for people who can access judgments online, reduce bureaucracy, and achieve efficiency.
The report stresses that the success of these reforms efforts are predicated on strong political will and national ownership.
The recently adopted 2030 Agenda for Sustainable Development includes key targets for providing access to justice, and tackling corruption. The report provides a fresh perspective on ways to develop integrity plans as part of broader judicial reforms, by illustrating inspirational experiences that countries can adopt to deliver justice for all.
The report was published by UNDP’s Regional Bureau for Asia and the Pacific and can be accessed online here (http://on.undp.org/dMP)
For additional information, please contact Elodie Beth, UNDP Regional Anti-Corruption Advisor, at elodie.beth@undp.org.
* * *
UNDP partners with people at all levels of society to help build nations that can withstand crisis, and drive and sustain the kind of growth that improves the quality of life for everyone. On the ground in nearly 170 countries and territories, we offer global perspective and local insight to help empower lives and build resilient nations.
Notes:
1. Perception survey Global Corruption Barometer, Transparency International, 2013. http://www.transparency.org/gcb2013/report.
2. http://www.transparency.org/whatwedo/publication/people_and_corruption_africa_survey_2015
3. The reference to Kosovo is understood to be in the context of Security Council Resolution 1244 (1999).

- February 11, 2015
Richard Bistrong , a writer, speaker , and blogger on anti-bribery compliance issues, contributes the following guest post: As the recent OECD Foreign Bribery Report made clear, debarment (prohibiting the defendant company or individual to engage in future government contracting) is very rarely used as a sanction in foreign bribery cases, most likely because prosecutors worry that debarment would be an excessive penalty that would often do too much collateral damage to innocent parties. I have argued that debarment can and should be used more frequently, and that the legitimate concerns about disproportionate punishment can be addressed by using various forms of “partial debarment.” In a recent post , Professor Stephenson draws attention to a number of potential shortcomings to my proposal. While I agree with some of his points, I think he understates the ways in which debarment—as distinct from fines or other monetary penalties—can have a distinctive deterrent effect on f
Read more

- February 08, 2015
Addis Ababa — The role of Civil Registration and Vital Statistics (CRVS) in attaining good governance in Africa as well as the need for good governance itself in conducting the civil registration processes across the continent, will come under review at a regional conference slated for the 7th to the 9th of February 2015 in Yamoussoukro, Côte d'Ivoire. Read more in All Africa. http://allafrica.com/stories/201502061554.html
Read more

- December 10, 2019
International Anti-Corruption Day - United against corruption for development, peace and security (Campaign resource).  The global campaign #UnitedAgainstCorruption focuses on corruption as one of the biggest obstacles to achieving the Sustainable Development Goals (SDGs). Find out about the campaigns and its communications materials via the link below. United Nations : http://www.anticorruptionday.org/actagainstcorruption/en/index.html   Ensuring sustainable solutions to combatting corruption (Blog).   “Learning from our anti-corruption work in the past decade, we, together with our development partners and the anti-corruption development community in general, have identified four key priority areas of interventions for the ‘Next Generation of Anti-Corruption Programming’: Sustainable Development Goal 16 (#SDG16) and anti-corruption; technology and innovation; business integrity; and social accountability.” Haoliang Xu/United Nations Development Programme:  https://
Read more