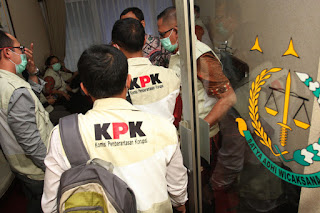 INFO: 'Call Me,' KPK Tells Private Sector in Fresh Efforts to End Corruption.  The Corruption Eradication Commission, or KPK will step up corruption prevention measures by teaming up with the private sector to stamp out the practice of bribing public officials.

COMMENTARY: Can president-elect root out endemic corruption in the Philippines?  "Corruption is the root of all problems in the Philippines. Since Ferdinand Marcos, five presidents have been elected and, although each pledged to fight corruption, none succeeded. Indeed, two of the five were prosecuted for corruption offences. The main reason for the failure is the lack of political will at the top. This translates into a lack of support for its anti-corruption agency, the Office of the Ombudsman."

INFO: India anti-corruption body plans 'Integrity Index' for govt agencies.  In a first, the Central Vigilance Commission has decided to develop an 'integrity index' to help government departments assess where they stand on anti-corruption measures.