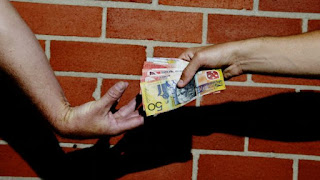 INFO: New powers mooted for Australian state's corruption and financial watchdogs.  Victoria's anti-corruption and integrity bodies are set for a shake-up with greater powers and changes to their functions being considered.

Read the story by Benjamin Preiss, in The Age: http://www.theage.com.au/victoria/new-powers-mooted-for-victorian-corruption-and-financial-watchdogs-20160328-gnsb26.html

COMMENTARY: The Roles of Anticorruption Academics and Advocates: Insights from the NGO Side.  "Despite our shared interests in understanding and fighting corruption, there’s often quite a gulf between the academic and advocacy communities."

Read the post by Matthew Stephenson, in the Global Anticorruption Blog: http://globalanticorruptionblog.com/2016/03/29/the-roles-of-anticorruption-academics-and-advocates-insights-from-the-ngo-side/

INFO: Indian firms say they pay 50% of cost as bribes.  Indian firms pay 50 per cent of total project cost, on an average, as bribes to speed up clearances for real estate and infrastructure ventures, according to a report by the World Economic Forum (WEF) on corruption in the country.

Read the article by Vikas Dhoot, in The Hindu. http://www.thehindu.com/business/Industry/firms-pay-50-of-cost-as-bribes/article8386124.ece